What did Norman do?

When Zach is in trouble for hitting or screaming or whatnot, he goes to his "spot", which is basically time-out, we just started calling it his spot as he sits on a hot pink mat. And usually screams. I got the mat for our laundry room to match the hot pink stencils on the wall (I will give you a minute for that to sink in), but somehow it worked its way out of the laundry room and into the breakfast room.

Where Norman likes to sleep on it. When Zach sees him he always exclaims "Norman is on my spot! Did Norman hit you Mommy?" then to Norman "We will set the timer and come back to get you."

Poor Norman, just resting and Zach has him in time-out. 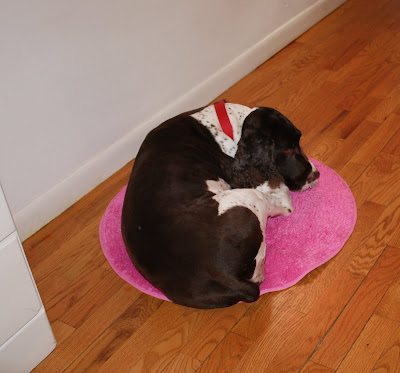 While adjusting to having a new baby in the house is not, in any way a small adjustment, one thing is: being called Mommy. With Zach, people would say "There's your Mommy!" and I would look around for the true person who would come take care of him. Perhaps someone who was not drinking on the job. With James though, I took to it right away. Most likely because the person who calls me Mommy does so about 130 times a day. I have been worn down. "Yes, yes I AM your Mommy and I am RIGHT HERE." 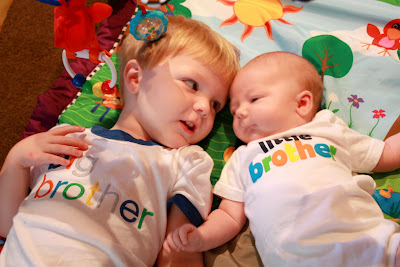 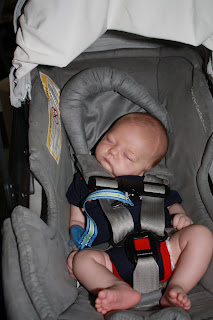 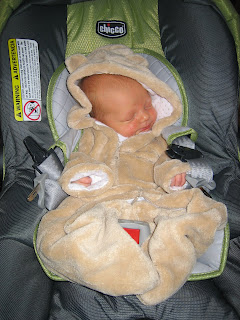 Perhaps a profile would be clearer?
Baby A 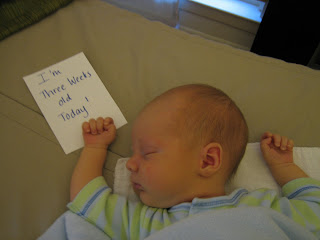 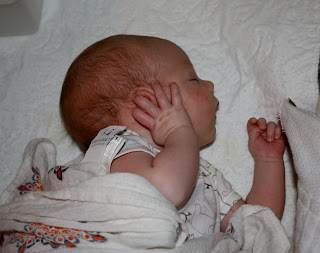 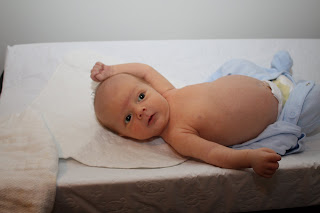 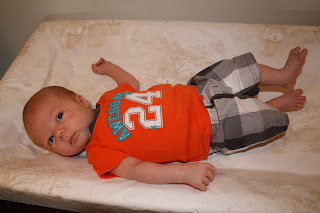 If you guessed that Baby A was Zachary and Baby B was James then you are right! While they are not identical they really do bear a striking resemblance to each other that even I admit now. And since I thought Zach was the cutest thing in the world, that is lucky as I feel the same way about James.
Posted by Unknown at 9:00 AM 2 comments:

What's in a name?

Many people were surprised when James was born that he was named James. Why? Two reason really. 1. we could never agree on a boy name which is very unlike us, and 2. the boy name we came closest to agreeing on was not James but Tate.

About two days before the birth Alex decided he was really not set on Tate. He tried to bring up some of his old standbys such as Terrance, Lionel and James Joseph. I said we should just wait until the baby was born, maybe it would be a girl and this all would have been pointless (I should have heard God laughing at that), but Alex was determined to go to the hospital with a name for both genders.

Finally around 7pm the night before he was born, I said I was pulling the uterus card - I had carried this baby for 10 months (very uncomfortably) and I will be the sole source of sustenance for said baby, for months and therefore was only accepting the following name options, listed in no particular order:
Tate Joseph Wall
James Wall
Anderson Joseph Wall

I didn't care which one, I liked them all but NO OTHER NAMES WOULD BE CONSIDERED. He took about a 30 minute bike ride and came back with James Wall. Alex picked up on what Lauren and I did not, with that name each boy would share a middle name with one parent. And here he is. 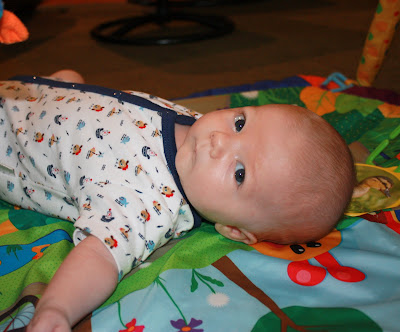 I think he could look sort of like a Tate, but technically he looks like every other 6 week old so we could call him Manuel, Michael or Xavier. But he is our sweet baby James for now and always.
Posted by Unknown at 10:32 AM 1 comment:

While you are awake

My how time flies when you are not sleeping! Or sleeping in 1.5 or 2.5 hour spurts like my sweet James. I can't believe he is a month old now! 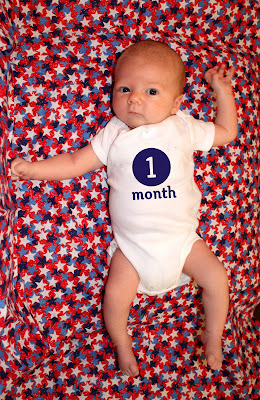 He weighs 9 lbs and is at least 22 inches long. Huge I tell you. The preemie diapers (up to 6 lbs) are like low rise undies on him. He is an eater for sure. And he loves nothing more than being held. Just today he was screaming in the car when Alex, he and Zach went to get a car wash. The second I picked him up he melted and fell asleep on me. In the driveway. In the 100+ heat. If you are holding him (and he is not hungry) he is completely happy.

Alex got his first real taste of having a newborn last night. Yes, this is our second child, but remember, Alex was not home in the evenings really at all with Zach. Anyway, last night I went out to dinner with some friends and he had the boys - with some help from Uncle Chris. When I arrived home around 10 he told me that he had eaten every hour and refused to be put down. I was shocked...oh wait, I was not the least bit surprised having walked another Wall baby around the floor about 2.5 years ago. However this one has way more of a need to be held than his older brother. I did get the cuddler I wanted...be careful what you wish for.

And that is the end of this post due to someone crying to be held. Again.
Posted by Unknown at 5:44 PM No comments: