A few months back I saw Pinterest mentioned on a blog I read and because I am a total follower I rushed over to join. I was not really sure about it and was a bit of a slow starter. But once more of my friends joined and we are all linked together it. is. awesome. Basically it is a virtual pin board, so when you come across something on a website you want to remember to make/bake/wear/buy you just "pin it" to a board on your Pinterest page.

Once I started planning Zach's third birthday I really got the hang of it. I decided to use the theme "Little Man" so I needed samples of little man parties and all sorts of mustache themed suggestions. And I was not disappointed! I spotted an invite and party favor tags from Sarah at Create Studio and wanted to use them immediately. She mentioned in her post that she would share them and graciously did so. Did I mention that I do not know Sarah? That upon reading that she would share them I emailed her and she sent them right over like the awesome stranger she is? Because both of those are true. World wide web - what did I do without you? (Do NOT answer "talked to my husband"... because that is also true)

Here is the invite I designed stole based on her favor tags: 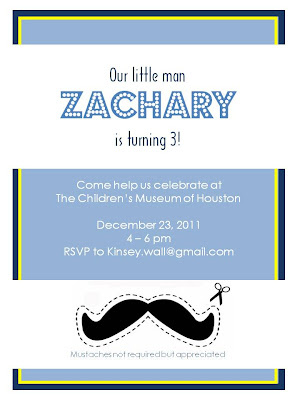 I am totally geeked out on planning all the things to go with the theme but also enjoy that I am hindered by the Children's Museum restriction on no hanging things on walls or ceilings. Let's face it, I need some boundaries.
Posted by Unknown at 9:00 AM No comments: 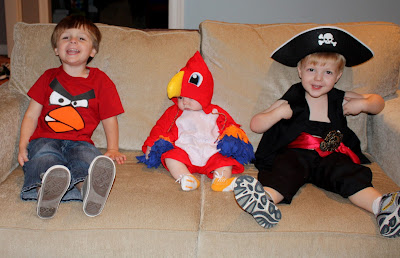 Pirate Zach loved trick or treating. Loved. It. But I did not love the meltdown before, followed by the timeout (because he literally could not hear a word I was saying with the lure of candy floating in his head) and the meltdown after because he wanted to go back out. Why do I forget that Halloween is terrible? That it is just too much? Too much excitement, too much build up, too many expectations (both parents and kids) and too much candy? It is exhausting.

But the fun part of the evening was when Zach and his friend Tyler were hitting the houses in our neighborhood. After the 2nd one they had it down. We, the ever doting parents, let them go up to the door by themselves. Yes, they are not even 3 years old, but we could not leave the cooler unmanned. To be fair, I was wearing the tired parrot and Jen was holding my beer. But the two little boys walking up to the doors was possibly one of the cutest things I have ever seen.

One tired parrot, up waaaay past his bedtime. 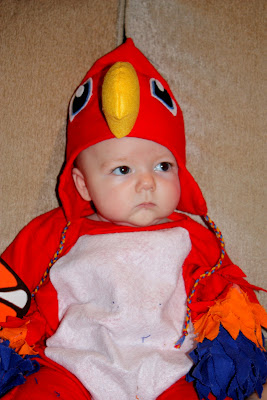 Zach and Alex sorting the loot. 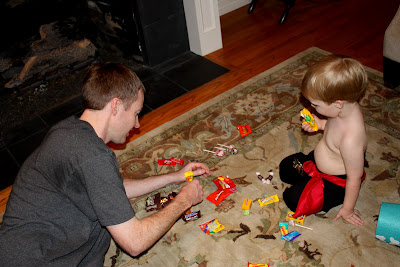 James is four months old and happy as can be! Well he is happy when I am holding him and his brother is not "patting" him. He weighs 14 lbs and is 25.5 inches long. That makes him in the 36% for weight and 74% for height. He caught wind of that 36% and has since been eating like I have been starving him. Every 3 hours.

James laughs and beams at us all the time but the main change from 3 to 4 months, is that he has found his hands and he loves to put them in his mouth. He also kicks and waves his arms around in his bouncer. Especially when he is getting tired. It is like he ramps up before he crashes. He is still not sleeping through the night, but I know that will come.

Actually, I secretly think I am never going to get a full night's sleep again. Two days ago James only got up at 11 then slept until 7...but his brother was up at 3 and 4. Such is the life of a mother to young children. This too shall pass (says my mom). 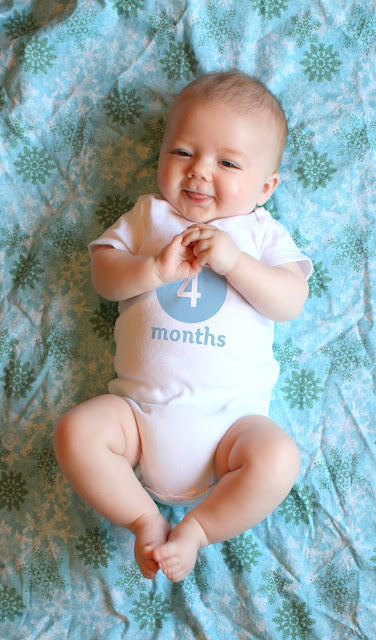 I went to Zach's Halloween parade again this year and he was an old pro at this whole parading gig. He walked with his friend Evelyn as Elmo, roared with Dragon Ben and danced away when I left. James stayed at home with his friend Maria so I could hang out with my big guy alone. 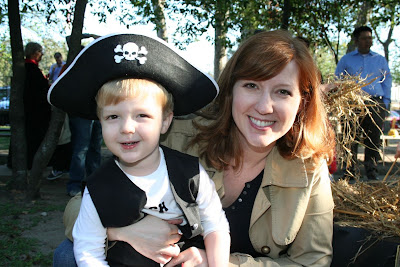 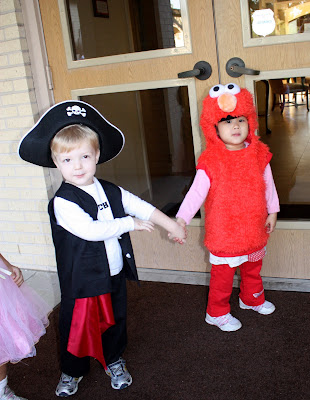 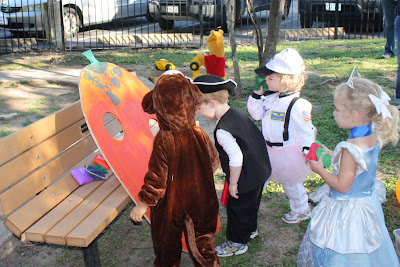 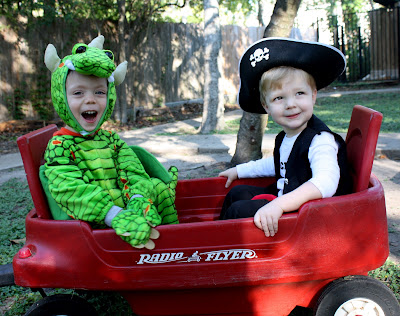 Email ThisBlogThis!Share to TwitterShare to FacebookShare to Pinterest
Labels: Holiday

I tried yet another crafty project with Zachary - making faces out of raisins on oatmeal raisin cookies. He is very into pumpkins right now so we called them pumpkins and he was excited. For about 3 pumpkins then he just wanted to eat the raisins. And similar to his bunnies, his look like Salvador Dali got a hold of the pumpkin face.

This one has eyes, a nose, a mouth and a neck. 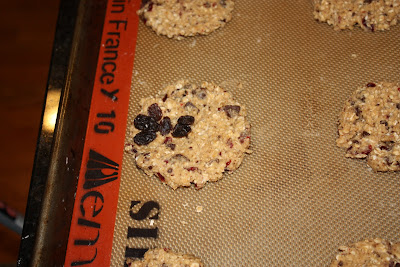 Please note my "samples" at the bottom. 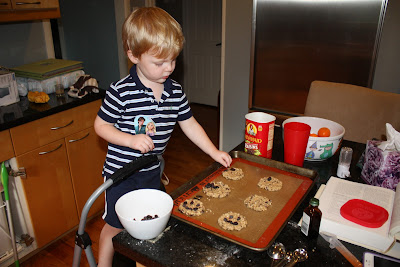 Just like last year we took Zach and now James, to the Houston Zoo for Zoo Boo. All the kids are dressed up and they get to pick a mini-pumpkin to decorate and trick or treat from tents around the park. This year we went the Friday before Halloween and it was packed. It was also the first cool day of the year so Zach the Pirate looked like Zach the Skeleton for much of the day (thank you Aunt Vickie!). 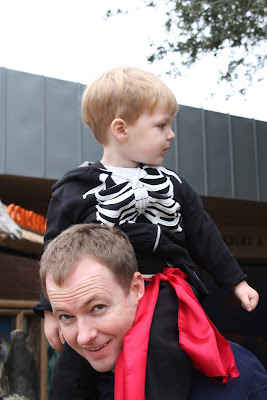 I made both the boys costumes which I like to do and I figure this will be the last year before they want to be superheros or football players. And let's be honest - I had a vision. A vision of Zach the Pirate and James the Parrot. 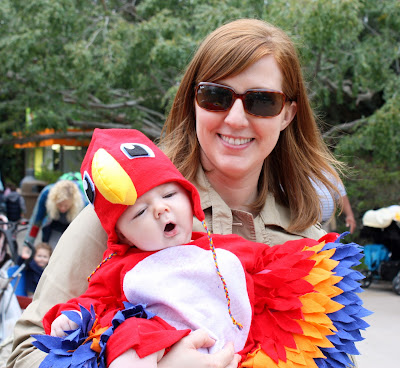 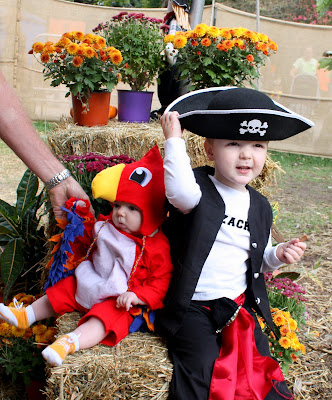 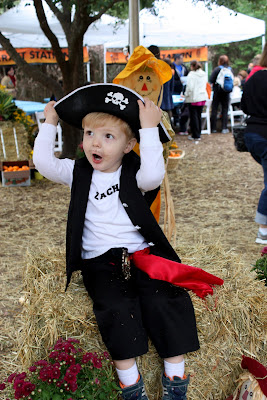 The Houston Zoo has a new African exhibit with giraffes, ostrich and rhinos. You can also pay $5 and feed the giraffes. It was super cool even though Zach was a tad scared so Alex and Vince got to feed them. There is also a new large monkey exhibit. Each monkey had a blanket. No joke, the zoo keepers gave each monkey a blanket and they were all covered up in them. One even brought his over to the window, spread it out and sat on it. The gesture was entirely human. Fascinating. 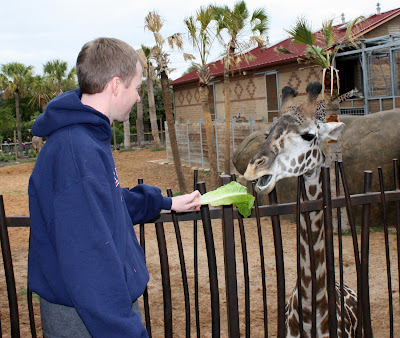 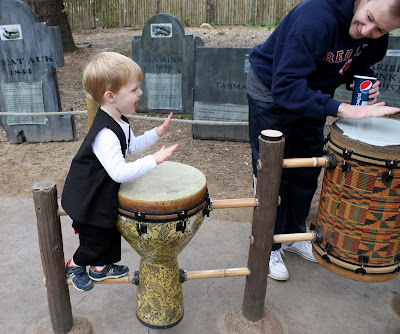 Are you kidding me with those jowls? James is so chubby I cannot even tell you.  I kiss those cheeks semi-constantly. He weighs almost 14 lbs and seems to be getting chubbier by the day and could eat all the other 3 month olds we see. Of note - he is just nursing except for one bottle before bedtime. So either my boobs are overfeeding him without telling me or we can be expecting a major lengthening out soon....fingers crossed. 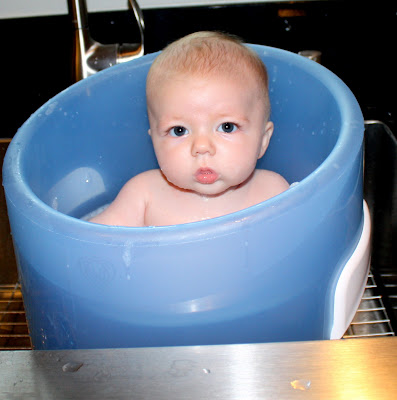