This weekend was not what anyone would call a fun-filled weekend. James was admitted to Texas Children's Hospital with low oxygen levels due to his brochiolitis. We got there around 11:30 on Saturday and left about 2 on Sunday. I will spare you the details (that my poor co-workers got) but the basics are this: He has bronchiolitis (brochitis for babies) and was breathing very rapidly. When the doc checked his oxygen level it was 90. It should be between 98-100. In the ER when he took a nap it dropped to 88 which is what got us admitted. They basically just watched him during the night and on Sunday morning they did a saline nebulizer treatment and suctioned him out. That seemed to make a huge difference as he was taken off the oxygen and took a long nap. We both did. He is doing about the same today, but there is nothing to be done for him, unfortunately but to watch him, suction his nose and try to get him to rest.

The Walls swooped right in and got Zachary. Dave and Tami came over and took him to the birthday party he was excited about. I have not gotten the recap on that, but I can only imagine Dave and Tami were mildly terrorized as it was at a music place so their involvement was required. I don't particularly like it myself. Liv and Vince kept Zach over night and into Sunday which he loved. When he got home all he wanted was to see his brother. Seriously, he kept saying that. "I want to see my brother". Of course he thought he was still wearing the mask from the hospital which was obliviously part of the draw. 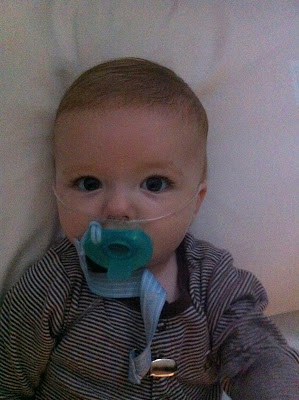 Please notice we cut down his pacifer to fit under the oxygen tubes. He was a real trooper with the tubes. The nurses kept commenting that he was so little to not have it taped to his face. Like tape on his face would have made anything better. Negative. If he took it out I just put it back in. But he forgot about it for the most part. Well, until I turned my back to put in my contacts. Then this happened: 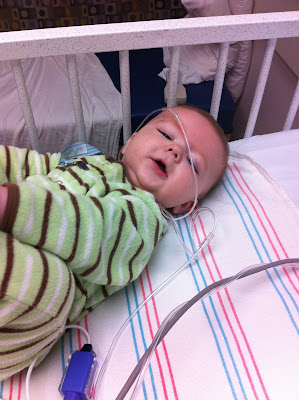 Here was the interesting part for me. I did not want to leave the hospital. Alex was all about getting discharged, he was asking the nurses and pestering the doctors. Me? I was very content. It took me a while to realize why. Then it came to me, all that was waiting for me at home was laundry, a dishwasher that needed unloading and a 3 year old who would for sure be acting up for attention. Plus they were sending me home with a sick baby and nothing that could be done but wait and see. No thank you. I would have stayed for days. I might go back tonight and see if Denise can come make my baby smile and Mary can bring me the dinner I ordered. 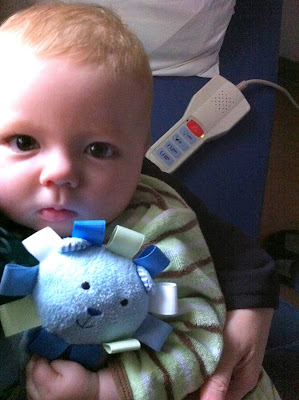