All in the Details

When I laid the track for the new train board, I told Zachary I also wanted to create a construction site in the middle and a pond on the side for the people in the house. He got very exited and said we could do a park at the end and a garden near the house. Oh and the pool. That boy is dying for a pool (that is a diving board PS). I love it! Such creativity! Maybe he does like art after all!

He also wanted to help.

Hmmmmmmm. I really like to have full control over my crafts. Really like it. But I do really like being a good mom as well. I was so torn.

So I summoned up my good mom-ness and said of course he could help. He should help! It is his table after all. I even made Alex take us all to Michael's on the way to dinner to get paint. Alex has never been in a Michael's and claims they depress him. I offered him some Lexapro and told him to put the baby in the basket and get a move on.

Back home Zach and I started with the brown for the construction site. That was great. My little man and I working together, doing art, I wanted to swoon. I had already painted the pool and pond the night before (I could not help myself) so I started painting the fish while he finished the site. But of course he wanted to paint fish too. I held my breath and gave him a red paint brush. The first couple of strokes I had to take some deep breathes and tell myself  "this is his table, this is his table, that is totally fine, don't crush his spirit". But soon it was evident he was going to try to paint the entire pond red as he kept spreading his red "fish" bigger and bigger, saying it was oil (where did he get that??) until finally I snapped. I had to tell him to "stop, stop you are going to ruin it!".

And cue terrible mom feeling. Seriously? I just told my baby that he was going to ruin some piece of particle board painted with cheap acrylic paint. 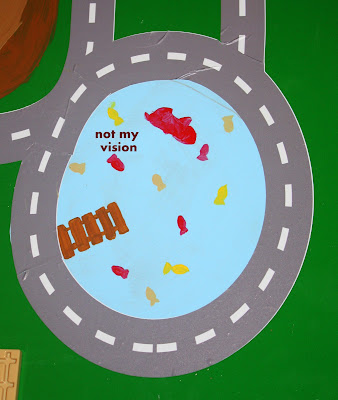 Thank the good sweet Lord Zach is much more like Alex than me and he was not the least bit concerned about my comment. I, of course. felt terrible and told him that he was an excellent artist but Mommy really, really wanted to paint the fish herself. He just shrugged and asked if he could paint the park.

Go for it baby, but do stay in the lines.
Posted by Unknown at 9:00 AM