Each year at Zach's school there are two Halloween parades; one on Thursday for the Tuesday-Thursday kids and one on Friday for the Mon-Wed-Fri kids. My baby is an every day kid so he gets to parade his sweet little heart out.  Last year we did not go to either as watching Zach be pushed around in the Bye-Bye Buggy was not really worth missing work. But this year he is oh so mobile and fitting perfectly in his Lederhosen.

For the past two weeks his class has been practicing parading by doing a spider parade with spiders on Popsicle sticks. Apparently there has been talk of shaking their spiders. Zachary thought this meant a full body shake, which we figured out about halfway through the parade. The kids before you see Zach are all in his class, they are: his best friend Ben the giraffe, the twins as bumble bees, Tony (aka the bitter) as a skeleton, Ella as something with a big hat, his girlfriend Abby as a pink cowgirl and then Zach. Bringing up the rear are Olivia as a super cute strawberry and Katia as something green. You can tell I only really cared about Zach.
Zach had a full cheering section made up of his Grandpa Vince, Godmother Alison and her boyfriend (and cameraman) Chris. Alex arrived just as we finished the parade. Of course.

Luckily my neigborhood mom's group had a Halloween fair at the park where there was yet another parade. Alex was there this time and got to parade with Zach. 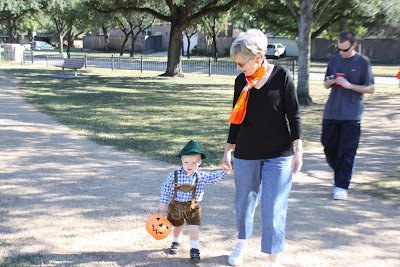 Heading to the park with Ollie 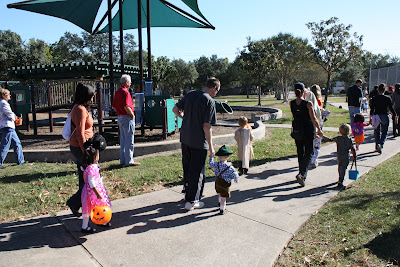 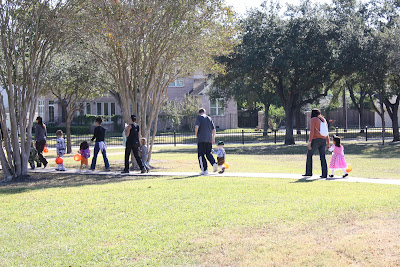 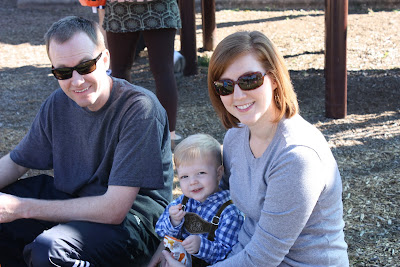 Family portrait courtesy of goldfish (and Ollie)
Posted by Unknown at 9:29 PM