This was by far one of the easiest and most successful projects I have done with Zach to date. To be fair, that is not saying much.

I am sure you have seen these colored rice sensory boxes all over Pinterest. You haven't? Hmmmm, we are obviously not following the same people. I personally have been stalking and pinning them for a while now. I was certain they were just for the stay at home moms. They scream, "Look how much fun my children are having while pouring rice back and forth! Look at the tiny little leprechauns I made so easily during nap time." We know I had to get in on that.

When I saw this rainbow rice one I knew my time had arrived. I also was off that morning which helped. So it was off to Big Lots to get a container and rice. Note: it would have been cheaper to just buy a five pound bag of rice at Randalls vs the one pound bags for .75 at Big Lots but math is not my strong suit. But they did have a nice large, shallow, square box that would be perfect for the sensory box. Once James was asleep (look, I am already right on track) Zach and I broke out the white vinegar which my mom buys me in bulk, the food coloring and rice.

I followed the instructions and split the rice into bags with five cups of rice in each bag. Zach helped me count, measure and pour. He also got to pick the colors. Here he is supervising the color mixing. 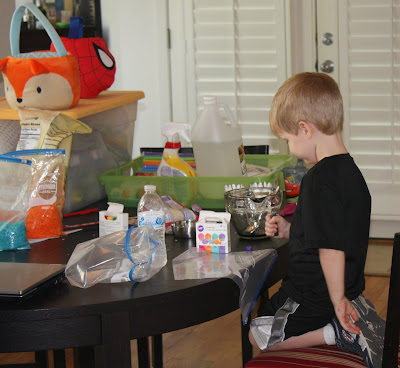 And squishing all the color around into the rice. That was his favorite part, waving and banging the bag of rice around. 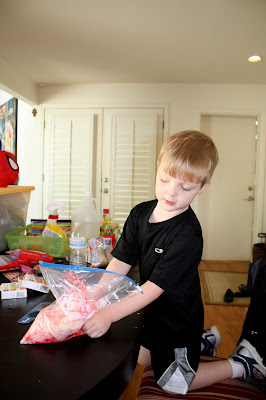 We let the bags dry overnight with the tops open to help alleviate the white vinegar smell. I didn't really notice was that strong once it dried, PS. My baby - he does love bright colors. 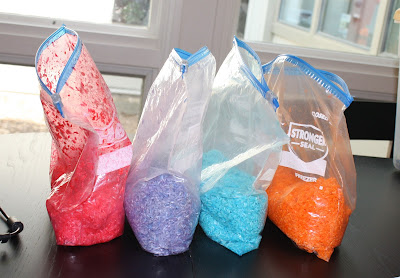 Ta-da!! Look at that rice! I actually did nail it this time. I literally had about 30 seconds to take this photo and before they both pounced on the rice. I was shrieking "don't touch it yet!" during those entire 30 seconds. Don't they know I have a blog to maintain? People need to see this colored rice! 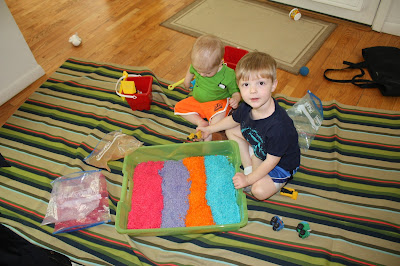 This really was one of the best, easiest and quickest projects. I put the rice filled box down on a washable table cloth in the middle of the floor (someone on Pinterest told me to do that and it was genius) and they played on it for a good 20 minutes. Which in our world is a lifetime. James actually stayed there longer than Zach though he did make me keep moving him because he would get rice on his feet. From him pouring rice on his feet. 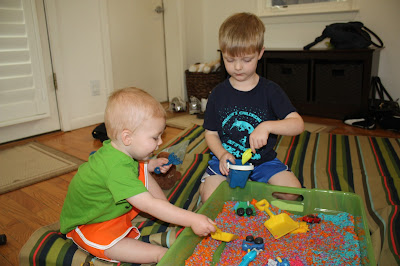 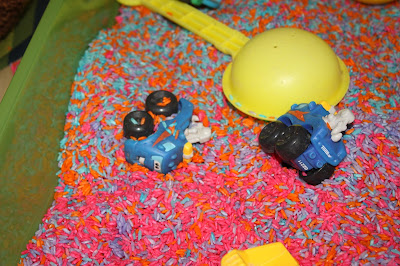 Then when we were done I just folded the tablecloth around the box and shoved it to the side. I don't have a ton of counter space in the back room/den so I couldn't put it up out of their reach. This worked out perfectly though as we just pull it out, play, then fold it back up when done. Minimal rice gets out and everyone is happy. Even James. 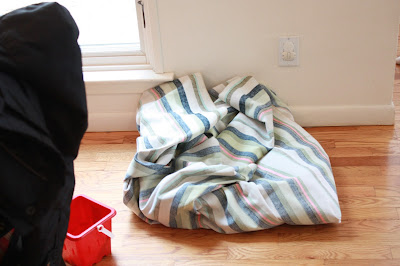