Each day something happens in my life that causes me to text my sister with the hashtag #momfail and an accompanying story. Usually, they are poor choices I have made throughout the day versus true failures. Examples include but are not limited to:
You get the point.

But on Wednesday I really did feel like I had a big mom fail. Last time we went to the dentist with Zach it turns out he has two cavities. That was my first #momfail, I felt, as that is so my fault, right? Well, his dentist told me it was not mom fail but his super sticky saliva that is genetic (thanks a lot, Walls). 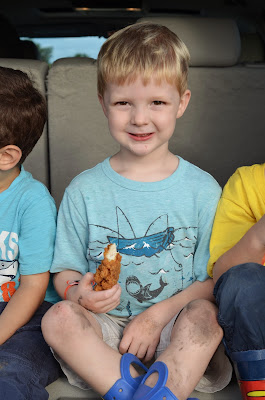 His cavities were in-between his molars on each side, which can, obviously, only be prevented by flossing. Which we don't do. I don't floss my own teeth (to my mother and Alex's horror) but I am expected to floss my four year old's? Yes, apparently or cavities are my consequence.

Anyway, I moved past that failure, deciding to blame it solely on the Wall genes. But we had to get rid of the cavities. I had to take my little, scared, four year old, who had not eaten a thing all morning, to be gassed and given Demerol. You all know I play it pretty cool and loose but I was a nervous wreck with this. Plus I could not even walk him back (which turned out to be a good idea in the end).

Of course, everything was fine. The dentist said he was the best patient of the morning, so "laid back", you would not know he was nervous. I guess those Wall genes are good for something.

But when we got home he was starving. He could not really eat and drinking through a straw was hard too, as he could not feel his lip. I just felt so helpless. At one point he started crying that he was just so hungry. Which just crushed me. So I let him have bell peppers (he loves those) and crackers. What I didn't think about was how all that chewing would hurt his lip. It swelled up huge.

And he was still hungry. But he could not have dairy yet so basically he couldn't eat anything else. Again, I am so out of my league here, so I just tell him to go lay down in his room, maybe not in the nicest of tones (#momfail 2). I could tell he is still out of it and maybe he is sleepy? Well, he falls right asleep and does not want to get up an hour later.

Well crap. Now what do I do? This kid does not nap. Has not since he turned three. And he is not stirring after an hour and a half.

I finally do what I should have done from the beginning- call my mom. She says to get him up, maybe they gave him too much gas or too much medicine in general.

I do and he is totally fine. He eats an entire turkey sandwich and drinks a glass of milk and is totally back to his old self in about thirty minutes.

You know there are like 500 blogs on potty training but nothing on this?

Wait, I didn't actually look online. I just thought I "knew" what to do.

Oh, and if you need me I will be flossing my child's teeth in the bathroom and wrestling the baby to get him to even brush.
Posted by Unknown at 9:00 AM

Email ThisBlogThis!Share to TwitterShare to FacebookShare to Pinterest
Labels: Milestones