James has really gotten into football as of late. And by "football" I mean running screaming "tackle football!!" through the house insisting anyone who is around chase him. Please don't try to actually take the ball from him, however. That results in ear piercing screaming and a full toddler meltdown. No, please only chase him at full speed, pick him up, turn him upside down and put him back down. Then repeat. 42 times.

Until recently, that is. James had played with a set of UT football players complete with the UT football field (similar here) out at his grandparents house and loved it. My mom had given Zach a set as well but I had clearly only been using the field as as a table runner for football parties (obviously). James spotted it after a Texans game watching party (so sad) and he pulled his chair up to the table and said, "Play football Mommy."

Note, it was not a question. It was an order. 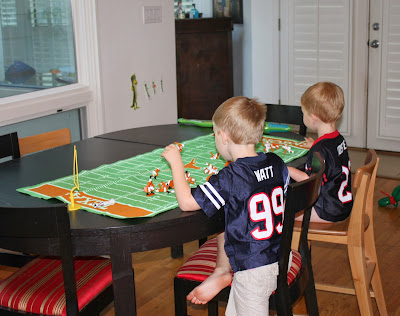 So I got our set out of the closet and he went to town. He insisted I set them all up ("Where this one go? Where this one go?") as if I had a clue where any of them go. When I we play football, we use all the players. In the set, there is a player from each team throwing the ball and one running. We put them all on the field. 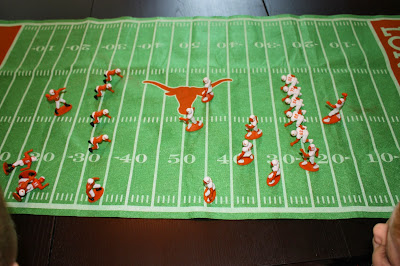 He then yells, "Tackle down!" and hits them all against each other. 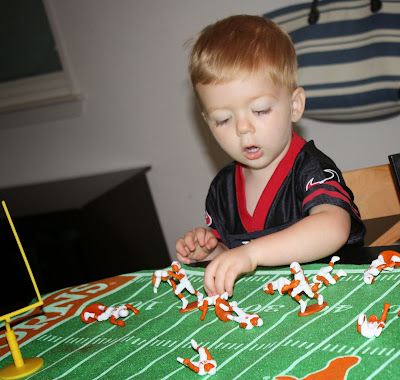 Zach gets in on the game as well and it is at this time I see why we have two of each player. They clearly can't actually play the game together (as if the two year old would allow that). So they play on their own yards of the field. 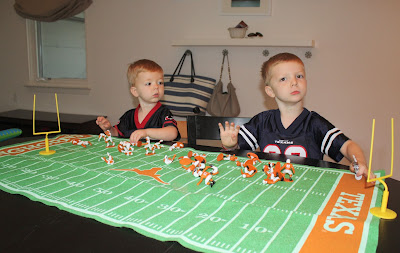 Very, very seriously.
Posted by Unknown at 7:00 AM